Commitment to a world of living
Knauf's social commitment - like everything we do - is based on corporate values of humanity, partnership, commitment and entrepreneurial spirit. These values help us to make decisions and do the right thing beyond the daily business - to promote society, culture and sport.

Support for social projects
Social projects and initiatives have always been the focus of our commitment. For some years now, we have made it a rule that we do not give Christmas presents to our business partners, but instead donate the money saved to needy organizations - about 10,000 euros annually. Our employees suggest for which projects the sum should be used. In 2013, she went to Regen Regen in Würzburg, a parent initiative of leukemia and tumors, the Carmelite nurses of an elderly care center in Iphofen and the community of Sant'Egidio in Würzburg for the Mensa for old and homeless people as well as the language school for refugees. In 2014 checks were sent to the KIWI association,

Promotion of arts and culture
Knauf places a special emphasis on his social commitment to cultural promotion. The heartpiece is the Knauf Museum in Iphofen. The baroque building with modern cultivation has been one of the world's largest relief collections of all the great cultures of mankind since 1983 as a permanent exhibition. Some 200 original casts of important works of art from major museums are displayed. Regular special exhibitions enrich the cultural life of the region. They either pick up content from the permanent exhibitions or devote themselves to their own themes, such as the cultural history of Tibet, Japan or Egypt. Also local artists get a platform here.
From March to June 2013, for example, the special exhibition "Stays through Ancient Japan" took place, among others, the physician and naturalist Philipp Franz von Siebold (1796-1866), who came from Würzburg. He came to Japan as one of the few foreigners in 1823 and still stands today for the mutual cultural exchange between West and East. Between July and November 2014, an exhibition on witchcraft was held in the 15th century.
For more information, visit www.knauf-museum.de . 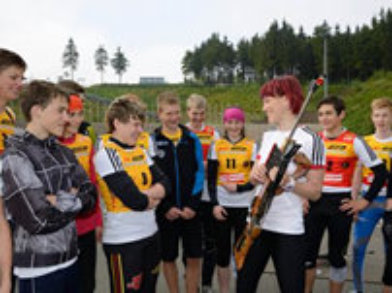 Sport also offers a welcome platform to present itself as a company. Whereas Knauf is well-known by its commercial customers, sports promotion is especially suitable for bringing the Knauf brand closer to the private consumer. Knauf Bauprodukte GmbH & Co. KG, which is active in this market, has been active for many years in sports - regional and supraregional. This is where basketball, biathlon and swimming play an important role. There are long-term partnerships with the s.Oliver Baskets in Würzburg and the athletes Kati Wilhelm and Thomas Lurz. It is not the professional sport that is at the forefront of the Knauf sports promotion, but the broad sport, the junior work and the handicapped sport.

With the professional partners and Knauf "Testimonials", we have won ground - breaking, sympathetic and successful athletes who remain faithful to their sporting career - like Kati Wilhelm - Knauf. The successful biathlete has succeeded in seamlessly adapting to their sporting successes with their sports moderation at the ARD and is still committed to Knauf. With the swimming world champion Thomas Lurz, we have also won an athlete who represents an example of discipline, will and ambition. In his lectures, he repeatedly shows the parallels between professional sports and professional life. Since 2014, Thomas Lurz has been active as a health care assistant at Knauf and has become an integral part of company health management.